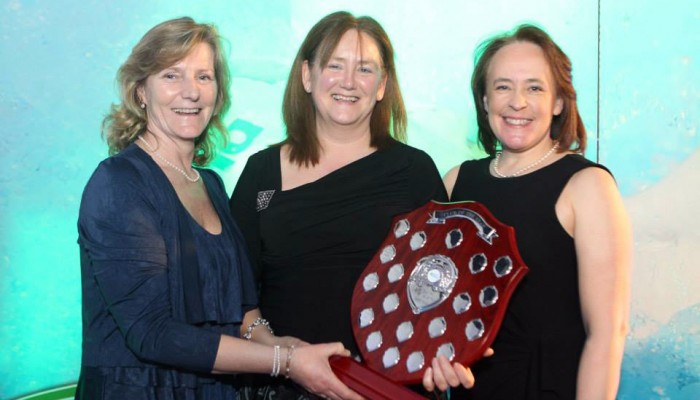 IT WAS a night to remember for Ennis Swimming Club at the annual general meeting of Swim Ireland that took place in the Strand Hotel in Limerick on Saturday night.
Only last month the club proved itself to be the dominant force in Munster swimming at the Munster Long Course Championships at UL when winning 23 medals, the breakdown of which was 13 gold, three silver and 7 bronze.
Now, out of the water the club has distinguished itself once more, thanks to scooping two major awards for its endeavours in 2013, while longtime club official and trainer Claire McGrath has become the new chairperson of Swim Ireland for the next two years.
A total of 17 awards were presented on the night, with Ennis being named National Club of the Year for teh first time, while club member and Rio Olympic Games hopeful Chris Bryan from Shannon was named Open Water Swimmer of the Year.
“It’s great for the club get honoured by Swim Ireland,” Ennis Swimming Club chairperson, Caitríona McMahon told The Clare People. “Swim Ireland have had these awards for the last three years and there are a whole load of categories involved in them.
“We got regional club of the year first of all and then clubs go forward from the different regions and go before a selection committee for the national award. It’s based on your achievements over the previous 12 months – the way your club operates and the standards you operate to,” she added.
The criteria laid down for the awards take into account a number of different areas. These include: achievements at all levels of competition, increased and sustained participation rates, club development such as links with schools, education and training of volunteers and coaches as well as a sporting attitude.
Ennis ticked all these boxes in 2013, winning the provincial award before then scooping national honours at Saturday’s annual gathering. “It’s brilliant for everyone involved in the club,” said Ms McMahon. “We operate the club to high standards and to get recognition like this is fantastic for everyone and what we’re trying to do.
“We have a great bunch of people in Ennis Swimming Club; we have a great coaches, committee members, parents, while it’s the kids behind us – the swimmers – that really give us the push to be the best that we can be for them and to make the club the best it can be.
“The swimmers are really chuffed with this as well and the plaque will be going on display in the trophy cabinet at Ennis Swimming Pool. On top of that it was great that Chris Bryan was also named Open Water Swimmer of the Year, while it’s a huge honour for Ennis Swimming Club to have Claire McGrath as the new chair of the board of Swim Ireland,” she added.
Speaking to The Clare People, Ms McGrath expressed her delight at receiving the backing of the clubs of Ireland for the prestigious post. “I had to go forward for election and to get the job I had to be elected by the clubs of Ireland. It’s great to get the backing of the clubs,” she revealed.
“I was on the board and having got that experience I decided to go for the chair’s position. It was a great night for Ennis Swimming Club and I am looking forward to the next two years,” she added.

Above: Claire McGrath, the new chair of Swim Ireland; Caitriona McMahon, chair of the Ennis Swimming Club; and committee member Alison Deane at the Swim Ireland Awards in the Strand Hotel in Limerick.

Best of luck to all our swimmers competing in the Grade 3 Gala in Mallow this weekend
May 25, 2017