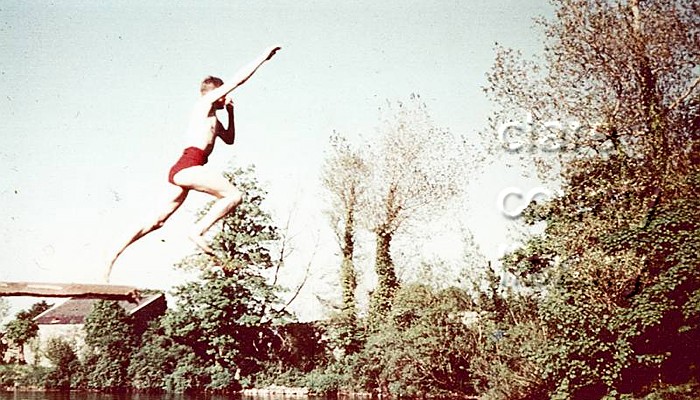 The introduction to swimming in Ennis has been recorded by the purchase of a tract of land in the 1920’s at an area known as ‘The Turret’ a part of the River Fergus on the Lahinch Road. This gave the local community public access from the bridge to the bend in the river. Subsequently diving platforms were installed at 1m and 3m heights along with a concrete entrance platform. This was the main swimming venue in Ennis.

The next official record of swimming was in 1937 with the formation of the Clare Swimming & Lifesaving Association due to the efforts of Harry Gillespie & John Quinn and was made up of lifesaving clubs throughout Clare. Their first gala was held in Ballyalla lake on 2nd July 1939.

It was not until 1941 that the Ennis Swimming & Lifesaving Club as we know it, was formed and its first gala was held in ‘The Turret’ in August of that year. Every member of the club was expected to undergo lifesaving instruction and as a consequence the club became the strongest lifesaving club in Munster & Ireland winning innumerable Munster titles, both the Presidents & Central Councils Cups, which were the Irish Red Cross Water Safety Sections Irish Championships. County Clare continues through Clare Water Safety to be one of the strongest lifesaving clubs in the country. Leading members of the club at that time were Fergus Barron who we can thank for much of our early history. In the formative years the Maurers, Lynch’s, Coffey’s, Griffins, Barrons and O’Reilly’s were the driving forces followed by Conal O’Beirne, Rory O’Connor, Dinny Maurer, John Duggan and Paddy Browne in the 1950’s to 1970’s.Ennis Swimming & Lifesaving Club training & competition continued in ‘The Turret’ through the 1950’s and 1960’s.

In circa 1958-1960, following a tragic local accident, which resulted in the the death of Jackie Moloney, a leaving cert school boy, his family donated his wallet and the contents thereof to Mr. Paddy Browne for his assistance in the recovery of his remains. This he donated to start a fund so that ‘there would be no more drownings in Ennis for want of a pool’. The presiding Bishop, Bishop Fogarty whose residence backs on to the Turret immediately donated the sum of £100 from the parish towards the fund. A separate pool committee was formed by the local community including Ita O’Shea, Rose O’Shaughnessy, Teresa Corcoran, Dr. Bill O’Keeffe, Liam Casey, (Town Clerk), Barry Pickett, Kevin Vaughan, Sean Merry, Dinny Maurer, Paddy Browne & John Duggan among others.

A suitable site was identified behind the county hospital, which was then being used only as a dump into a swamp. The pool committee raised the purchase price and handed the deeds to Clare Co. Council in July 1967. Fund raising continued and the pool was built and officially opened in October 1969. The pool committee continued to run the pool, with huge assistance from the swimming club throughout dark winters, until the mid 1970’s when the running of the pool as a local amenity was handed over to Clare Co. Council.

This brought a new era and new blood to the swimming club when the Murphy’s and the McGrath’s took over the helm and this has passed to their children and between generations they have dedicated over 40 years of voluntary service to Ennis Swimming & Lifesaving Club to bring us to where we are today.

Ennis Swimming & Lifesaving Club have a fabulous heritage of which we are very proud and it was only fitting that, at our 2011 Ennis Invitational gala, one of our own Norma Cahill (nee Murphy) achieved a new European Masters Record for the women’s 1,500m freestyle, at her local pool, in which herself and her family have dedicated a lot of years.

Finally, we would like to thank all our many contributors who have recalled stories and instances of many years past, to the best of their ability, so that we may in the near future, construct a more detailed history of our club. We would invite any of you with pictures or information that may help us further this, to contact any committee member.